What is the best Cloud GPU?

Since the advent of high-load computing, science and technology have been moving forward at an accelerated rate, and many people are still finding ways to optimize the computing process. There are various solutions on the market today, such as a physical machine in a consumer server room, a virtual private server, and a Cloud GPU Server. It is worth considering the pros and cons of each option. Ultimately, big data requires dedicated solutions, such as Cloud GPUs or dedicated servers. What's better? In this article you will learn about the various kinds of Cloud GPUs offered by leading vendors, and see a comparison of Cloud GPUs and dedicated servers. We will also discuss how each GPU-based technology is implemented. Of course, first of all, you need to understand what a GPU server is.

What is a GPU server?

A GPU server is a high-performance computer with a powerful CPU, a large amount of RAM, and, most importantly, a high-performance GPU. As a rule, there are two or more GPUs in a GPU server. Modern manufacturers of powerful CPUs include AMD and Intel, with solutions such as the AMD Threadripper and the Intel Core i9. The amount of RAM used is growing rapidly: you can find machines with up to 1 TB of RAM. As for GPU models, Nvidia's devices, which are specially designed for big data, look very good. You can own and run a GPU server on-site, but it is expensive and can potentially cause problems with compute scalability, so owning a GPU server is not always technically and economically justified. If your HPC needs change or grow, you will need to upgrade your existing GPU servers, and putting additional GPUs in GPU servers is usually very expensive. There is an alternative solution, however: either a Cloud GPU or a dedicated server. Read on to find out which is best for you.

What Is a Cloud GPU?

Cloud GPU servers are also high-performance computers, only the consumer does not physically own them. They are servers that are offered by a vendor as part of their platform. GPU servers are mounted, maintained and scaled in the vendor’s data centers. Modern data centers take up hectares of space and contain thousands of server racks and kilometers of wires. Using cloud technologies, the vendor provides the consumer with access to its computing power. You select the set of GPU servers that you need to solve your computing tasks, and the vendor provides you paid access to the Cloud GPU server. Then, you can use it to perform advanced tasks, such as creating and managing artificial intelligence, deep learning, and other high-performance operations.

What Are GPUs Used For?

Before choosing a GPU solution, you should understand what tasks the technology helps to solve. GPUs and GPU solutions are used in many applications, such as working with videos, including editing, encoding, decoding, and streaming using the GPU. Modern graphic special effects also require processing with high-performance GPUs. They are also useful when working with

Solving mathematical problems, performing multi-factor analyses, and training neural networks are also tasks that can be handled by modern GPUs as part of GPU servers. Very often, these tasks are solved using the Python programming language with the participation of specialized software.

What Are the Benefits of Cloud GPUs?

Using a Cloud GPU server provides the consumer with a number of advantages. First, it is highly scalable; there’s no need to think about managing physical GPUs. Depending on the tasks you’re working on, you can increase or decrease the number of GPUs in the cloud. If, for example, you’re training a neural network, then after a while the calculations will increase dramatically. If you were running a local machine, you would have to keep adding expensive GPUs, but in the cloud, you just need to request additional resources for a moderate fee. That brings us to the second advantage: optimizing financial costs. Affordable Cloud GPU server rental is better than buying an expensive GPU. You can forget about buying, installing, checking compatibility, and maintaining local facilities. Everything is in the cloud. Third, your local computing resources are freed up, as a Cloud GPU server does not use local resources. Your CPU, RAM, and HDD will only be used to control the process of using the Cloud GPU server. And, last but not least, the time that you would normally spend on computing can be used for other purposes.

How You Can Get Started With a Cloud GPU

Nowadays, there are several large vendors that provide Cloud GPU servers. You can choose the vendor that meets your business needs. Four of the leading vendors are Google, Microsoft, IBM, and Nvidia. The cloud solution from Google is called Google Cloud GPUs. Microsoft offers its Azure N-series system. IBM is not far behind with IBM Cloud. Nvidia, which makes GPUs, also offers a cloud solution: AWS and Nvidia.

Before choosing which service to use, you must strategically define the range of tasks that need to be addressed, and how intense the load will be, whether it’s rendering, modeling, deep learning, or neural network training. Then choose the appropriate plan with the necessary resources.

Both Cloud GPUs and dedicated servers use virtualization technologies. They may appear to be the same, but they are not. In the cloud, concepts such as infrastructure, storage, GPUs and resources are shared among all tenants using resource pools, such as a CPU pool, RAM pool, and GPU pool. The entire cloud system is involved in the process of providing capacity to various consumers. A dedicated server is a separate physical server that is used only by the consumer who pays for the service. A separate dedicated server can also be a virtual private server. From the consumer’s point of view, they both serve the same function. 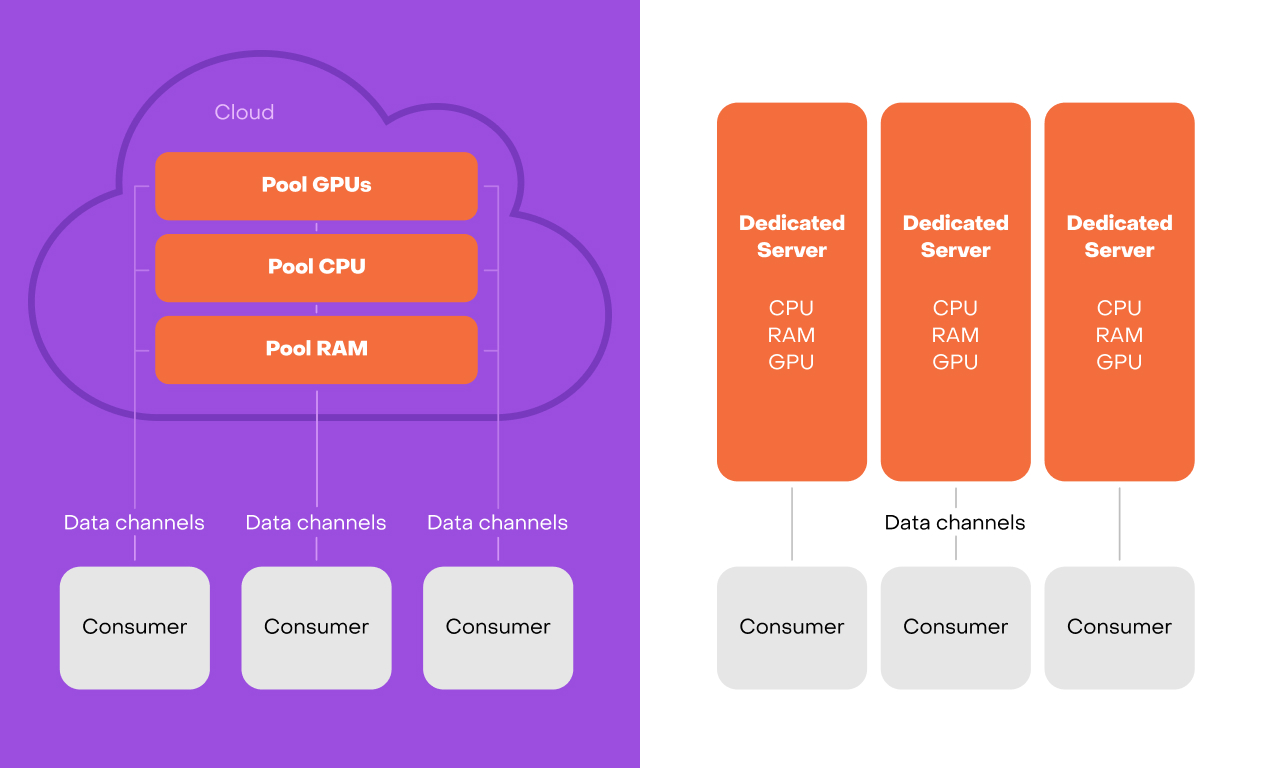 Both Cloud GPU platforms and dedicated servers have their advantages. In general, they have many common properties. The advantages of both solutions are maximum productivity and minimum financial, time and resource costs. Both solutions involve the remote use of GPU power. There are no server rooms and server racks that are needed for big data calculations. There are no powerful and expensive GPU servers. They both free up resources such as CPU, RAM and HDD. The local computer is only needed for remotely controlling the GPU in the cloud. Naturally, all these factors reduce the time and cost of performing resource-intensive calculations. A separate advantage of dedicated servers is that the entire infrastructure is deployed on a separate physical server. This provides additional benefits such as physical isolation, advanced security and great service quality.

What is a GPU in cloud computing?

A GPU in cloud computing allows you to perform high-load computing with savings in resources, time and money. These are the same GPUs that you’re familiar with, only in the cloud. GPU pools distribute the load among themselves and provide computing power to consumers. There are several vendors, including Google, Microsoft, IBM, and Nvidia, that offer their own cloud solutions.

How can I use Google Cloud GPU?

With Google Cloud GPU, you can perform high-load tasks requiring parallel computing. Cloud GPU servers offer powerful GPUs that don't need to be bought and installed locally. You can use big data to solve various problems involved in deep learning and artificial intelligence, render and edit video, or process graphics in cloud games.

Does Google Cloud have a GPU?

How do I find my GPU on Google Cloud?

10 simple steps: migrating from CentOS 8 to RockyLinux or AlmaLinux

A step-by-step guide on how to switch to RockyLinux or AlmaLinux - popular free distributions that are binary compatible with RedHat Enterprise Linux (RHEL).

What is the best GPU for deep learning?

Learn how to use a GPU for the deep learning process in machine learning.

Implementing a simple HTML5 server control panel with an IPMI

For remote access to physical servers, hosting clients use software tools that work only with an operating system and special software. We will tell you how it works with us at HOSTKEY.

We are going to tell you how we created our own LiveCD based on CentOS.

A waste of resources or an opportunity for non-Intel servers?